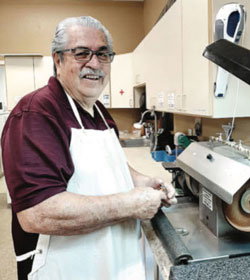 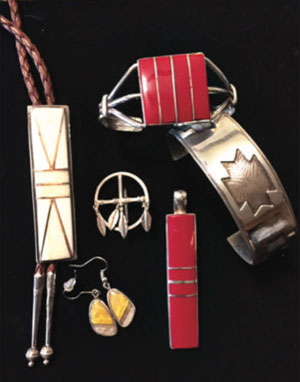 Richard Sanderville was born in Browning, MT, and is a member of the Blackfeet tribe in Browning. Because his father worked for the Bureau of Indian Affairs, he moved to several reservations during his childhood, so he learned the customs and traditions of several tribes. After graduation from Haskell Indian College, Richard and his wife moved to Albuquerque to work at Sandia National Laboratories, a research and development facility. He worked in nuclear and energy field testing, laser engagement systems development, and video engineering. After 35 years of service, he retired and bought a winter home in Sun Lakes. After arriving here 10 years ago, he saw the classes that were offered through the Rock, Gem & Silver Club and joined. He comments, “John Harrill was the silver chair and club president at that time and a fantastic mentor for me in my silversmithing journey.” Richard took every silver class and absorbed the many techniques from everyone at that time and continues learning from others. “I had no idea that I could design and make the jewelry that I have made.” He has been a member for 10 years and began teaching to give back to the club that gave him so much. He volunteers teaching silver one, silver two, inlay, and overlay classes and has served as the silver chairman for two years. He also monitors and assists new silver artists in open shops. Richard believes it is so important to serve as a mentor by helping others and keeping the club interesting and a good experience.

By Linda Shanahan
Appeared in the Sun Lakes “Splash, May 2020