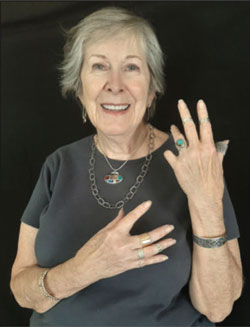 Susan’s last name is Carter Carter. That’s right. Susan Carter married Michael Carter in 1971, thus making her a double Carter. Susan is one of our more seasoned artists, and comes to us from the East Coast where she moved around growing up, ending on Long Island. Art is her major passion, but she was also involved in athletic swimming, running, and now playing tennis. Susan has a master’s degree from Pratt Institute and bachelor’s from Hofstra University, both in New York state. Having spent a summer studying in Tokyo at Sophia University, she developed an appreciation for Japanese art. Much of her printmaking art is influenced by Japanese esthetic.

She taught high school art for 19 years specializing in drawing and painting fashion jewelry, lost wax casting, and creative crafts. In addition she taught junior college for 27 years as an adjunct adding fine arts studio classes in watercolor and 2D design to her list. Susan has had exhibits and exhibitions all over this country, as well as in China, Taiwan, Japan, Germany, Spain, and Australia.

She and Michael moved to Sun Lakes in 2006, drawn in by the SLRGS shop and tennis courts. They recently became parents of an eight-week-old mid-sized poodle named Party. Needless to say, there has been a slight disruption of peace in their household. Susan is a lover of reading and board/card games. She also enjoys travel, and has visited every continent with the exception of Antartica. She served the Sun Lakes Rock, Gem & Silver Clubs as museum curator for three years and silver chair for two. Teaching Silver 1, 2, and Chains, she would love to have you join her. In Susan’s words, “I get much joy from teaching. I love seeing the look of satisfaction and pride on beginning students’ faces when things click for them.”